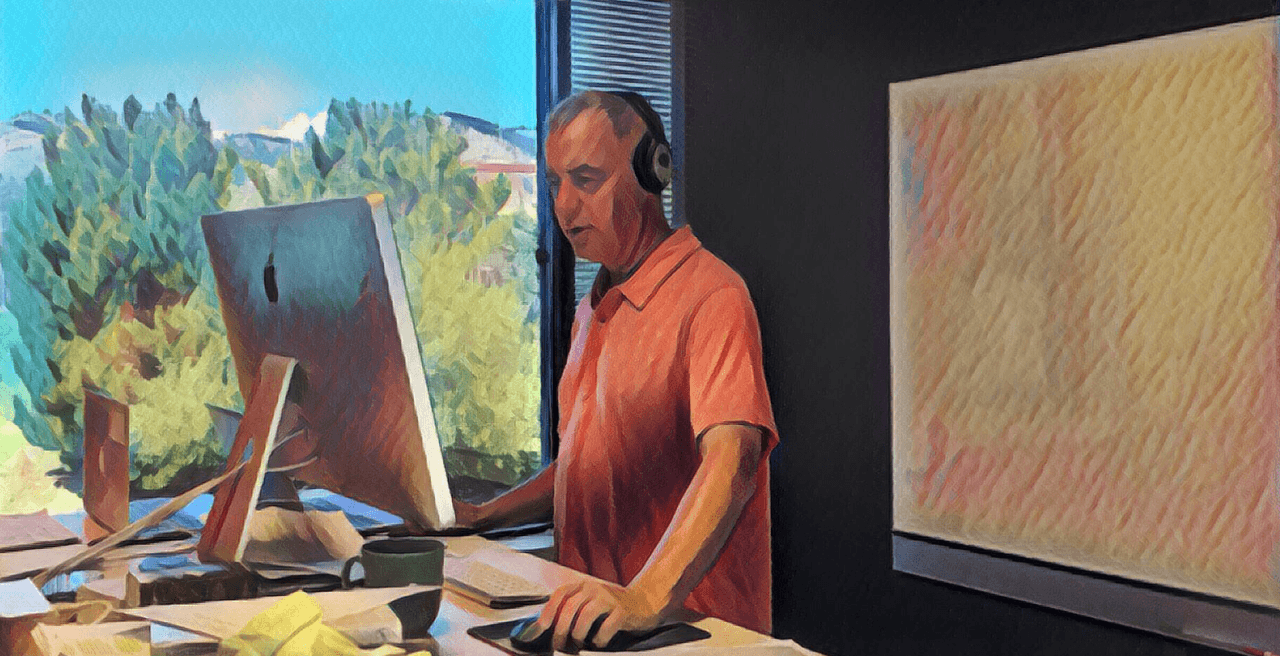 Our research scientists recently published a workshop paper on the lessons learned implementing the company's natural-language chat interface. This post summarizes the key lessons learned and identifies the open questions we faced during our initial implementation.

Phase Change is developing a ground-breaking cognitive platform and an AI-based collaborative agent, called Mia, that will dramatically improve software development productivity and efficiency. Mia utilizes natural-language processing (NLP) chatbot capabilities so new users can use the technology immediately with little or no training. 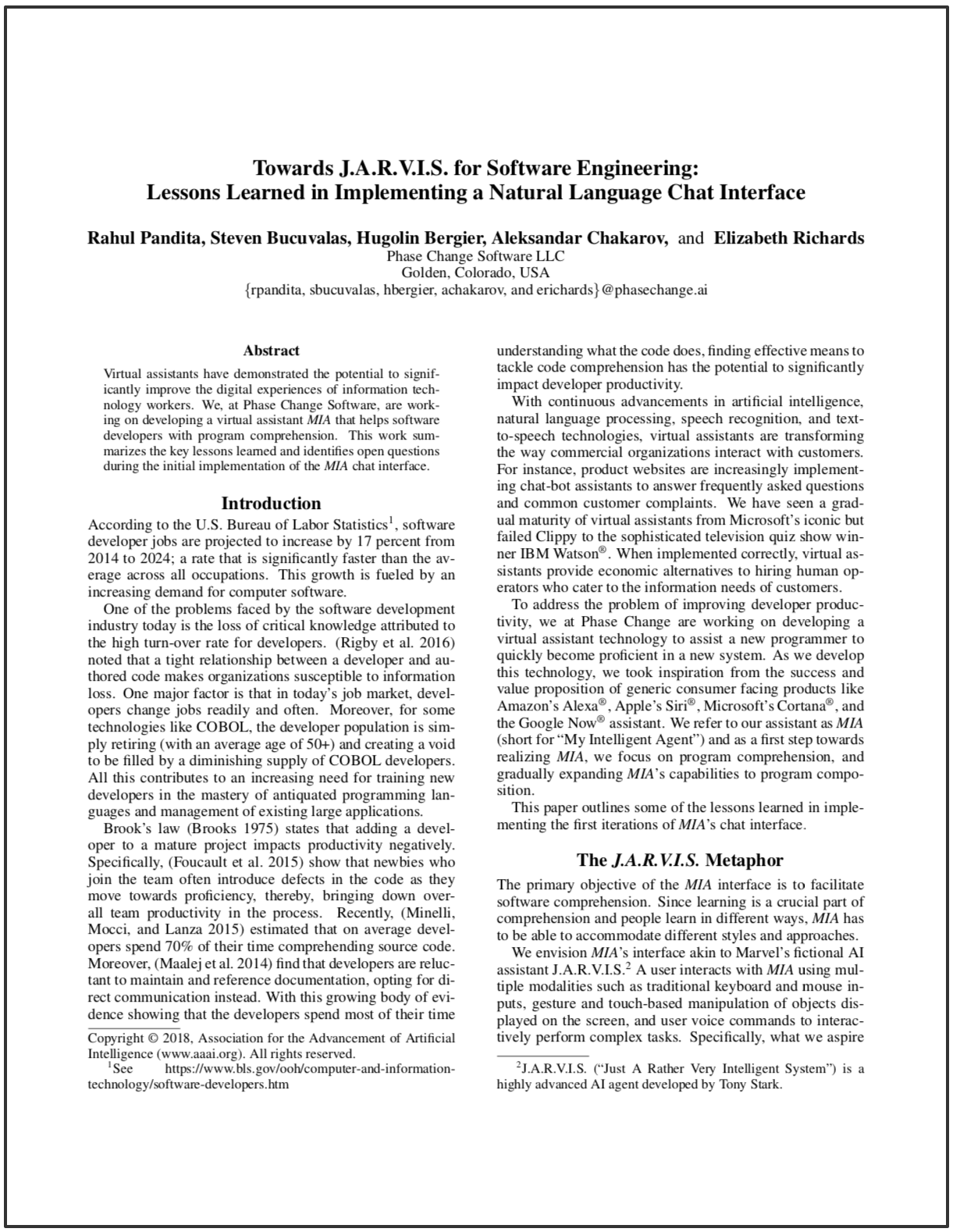 Virtual assistants have demonstrated the potential to significantly improve information technology workers' digital experiences. Mia will help software developers radically improve program comprehension. Then we will gradually expand its capabilities to include program composition and verification.

Here are a few things we learned during the first iteration of the Mia chat interface implementation.

Instead of building everything from scratch, consider reusing existing frameworks and libraries to quickly prototype and get feedback.

With the ever-increasing popularity and efficacy of statistical approaches, teams are often tempted to implement them without enough data to design an optimal work environment.

A rule-based-approach also allowed us to collect more data for a better understanding of the chatbot requirements, and future positioning to effectively leverage statistical approaches.

In our testing phase, we learned that although users appreciated honesty when our chatbot did not understand a request, they didn't take it well (to put it mildly) when the chatbot did not provide a way to remedy the situation.

There can be many causes for the chatbot failing to understand a request. For instance, the request might actually fall outside the chatbot's capabilities, or, in our case, one class of incomprehensible requests were due to implementation limitations.

While we can't do much about the former, building a recommendation system for the later class of requests almost always proves beneficial and vastly improves user experience.

For example, the noise in a speech-to-text (STT) component is a major cause of incomprehensible requests. In our fictional banking system, we've created software that allows pets to interact with ATMs, and a Mia user might form a query to discover all of the uses cases in which the actor "pet" participates.

If the user says: "filter by actor pet," we could expect the following transcript from the STT component, which, unfortunately, caused the subsequent pipeline components to misfire:

While users will most likely be more deliberate in their subsequent interactions with the STT component, we noticed that these errors are commonplace and very negatively affected user experience.

To remedy the situation, we used a light-weight, string-similarity-based method to provide recommendations. Subsequent observations indicated that users almost always liked recommendations - except when they were too vague.

To avoid annoying users, we came up with two heuristics. First, we provided no more than three recommendations. Second, to be considered as a candidate query for recommendation, the query's similarity measure had to score higher than an empirically determined threshold with respect to incoming requests.

The novelty of using a natural language interface quickly wears off. We observed that most users began sessions by forming requests with proper English sentences, but the conversation was quickly reduced to keyword utterances. Chatbot designers should plan for this eventuality. 😉

In formal conversation study, the entrainment effect is informally defined as the convergence of the vocabulary of conversation participants over a period of time to achieve effective communication. We stumbled on this effect when we observed that users employed an affected accent to get better mileage out of the STT component.

In psychology and cognitive science, subliminal priming is the phenomenon of eliciting a specific motor or cognitive response from a subject without explicitly asking for it.

We decided to see if subliminal priming would expedite entrainment. We began playing back a normalized version of a query with the query responses. That simple change led users to quickly converge to our chatbot vocabulary.

Consider the frequencies of following user request variations in our system:

By playing back "our system found following instances where output concept balance is less than 0," to each of these request responses, we observed that users began using the phrase "output balance less than 0," more, as shown in the frequency counts.

We also realized the benefits of leveraging data to prioritize engineering tasks as opposed to going with your gut.

So how does one decide which components to tune first? This is where data-driven prioritization can really help. For instance, in our setting, a light-weight error analysis helped on more than one occasion to identify the components we needed to focus on.

We hope that our observations will be helpful for those embarking on the journey to build virtual assistants. We would love to hear your experiences.

Published by: Todd Erickson in Science