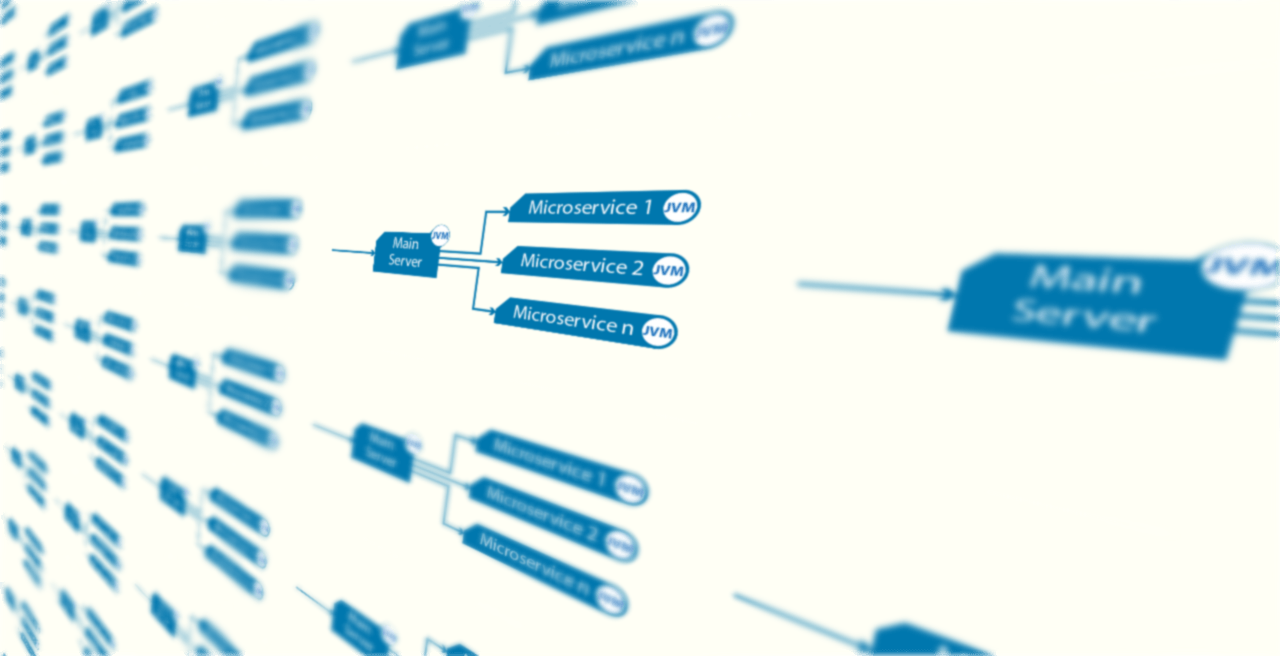 When we moved from being primarily focused on innovation to also developing a demo platform, our developers began to work with very different frameworks and libraries. As our interactions with more libraries and frameworks grew, we faced dev-setup issues with our monolithic architecture, including:

We began to consider moving to a microservices platform, which would allow us to isolate our developers' working environments and segregate libraries and software applications.

Industry literature and Rahul's personal experience at North Carolina State University pointed to a shift away from monolithic architecture to a microservices architecture because it's more nimble, increases developer productivity, and would address our scaling and operational frustrations.

However, moving to a microservices architecture made us address the platform's own issues, namely, how do we access these services – using in-house servers or through third-party hosted platforms?

However, at the time, we were still exploring microservices as an option and were not fully committed. Also, we still have to do a lot of homework before transitioning to the cloud. When we added security and intellectual property (IP) concerns to the mix, we decided on an in-house solution for the time being.

This blog post is about our process of determining which servers we would use to host the microservices.

To quickly get up-and-running, we repurposed four older and idle Apple Mac Pro towers that were initially purchased for departed summer interns. We reformatted the towers and installed Ubuntu Server 16 LTS to make the future transition to the cloud easier because most cloud platforms support some version of Linux (Ubuntu) out-of-the-box.

These towers were fairly old – the Xeon 5150 processors were released in June 2006. We started with them to prove out the approach and quickly determine the benefits without investing a lot of money up front.

Moving to a microservices model immediately solved many of our issues. First and foremost, it allowed us to separate our development environments into individual services.

For example, our AI engine for logic queries could work independent of our program-analysis engine and our text-mining work. This was incredibly helpful because, for example, developers working on program analysis who did not directly dealt with the AI engine didn't have to install and maintain AI-specific libraries, and vice-versa for AI developers and program analysis tools.

Now, each team simply interacts with an endpoint, which immediately improved our productivity. More on this revelation in a future post.

As we continued to implement the microservices platform, we were pretty happy with the results. Then our servers started showing signs of their technological age – performance lags, reliability issues, limited upgradeability, and increasing power consumption. The limited amount of DIMM, limited cost-effective upgrade capabilities, and constant OS crashes hampered our efforts.

For the next "phase" of our microservices evolution, we decided to acquire performant hardware specifically geared for hosting microservices.

Phase Change is a small startup with limited funding, so we had to purchase equipment that would meet our needs within a budget. Like many ‘cool’ startups, we are a Mac shop, so we naturally gravitated towards using Mac mini servers. We were already using Mac minis for file hosting, and there are plenty of websites detailing how to use them.

So, we considered the next best thing, mid-level original Mac minis that included:

The Mac mini form factor – 7.7 inches width by 1.4 inches height and 7.7 inches depth – and power consumption – 85 W maximum continuous power – were also appealing. The retail base price is $699. The cost-effective modern processors and increased memory were the most important factors in our consideration, and the tiny little Macs would integrate well into our 'cool' Mac company environment.

We were all set to move on the Mac minis until we found Russell Ivanovic's blog post, "My next Mac mini," which revealed that the Mac mini product line hasn't been updated since October 2014 – over 2.4 years, but Apple is still selling them at new-computer pricing. So much for the minis. Aargh!

Luckily, we didn't have to start at square one this time around, because Ivanovic's blog post revealed what he bought instead of the mini – an Intel NUC Kit mini PC. We asked Siri to do the math crunched the numbers and found that the NUC was a reasonable Mac-mini replacement. The Intel NUC Kits are mini PCs engineered for video gaming and intensive workloads. The base models include processors, graphics cards, system memory, space for permanent storage devices, peripheral connectivity ports, and expansion capabilities, but we upgraded our NUC6i7KYKs to include:

The following table presents technical comparisons between the old Mac towers, the Mac mini, and the Intel NUC Kit.

Our NUC Kits total price ended up being $786 per unit with the 16 GB SODIMM DDR3L RAM and 256 GB SSDs. If we had opted for 1 TB SSDs to match the standard capacity in the mid-level Mac mini, our price would have jumped to $997 per unit.

We chose the Intel NUC Kits over the Mac minis because of the NUC Kits' updated technology and overall better performance for the price. Putting together and installing Ubuntu Server 16 LTS on the NUCs was very straightforward.

Both units are fully configured and have been in full production operation for a few weeks. We haven’t encountered any issues. I'll divulge more on how they perform over time with different microservices and workloads in future blog posts.

P.S. We still looooove Mac towers and we are currently using them as test beds. That will also be the subject of a future blog post.

Todd Erickson is a tech writer at Phase Change. His experience includes content marketing, technology journalism, and law. You can reach him at terickson@phasechange.ai.

Published by: Todd Erickson in Technology